Sunday my cousin and I went to the local amusement park. We’ve been planning to go for years, but something always got in the way.

Our main destination was the Ferris wheel. A tiny metal construction compared to all the well-known monsters, but an exciting prospect nonetheless. 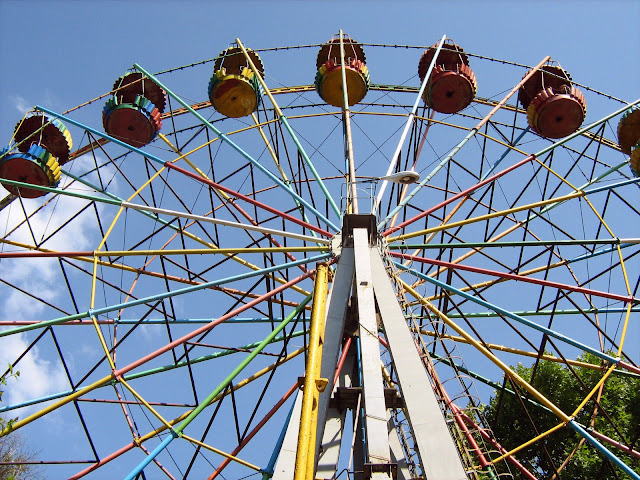 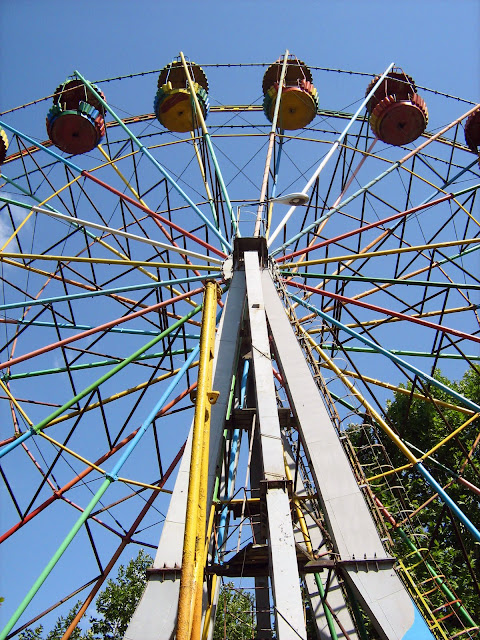 I’ve been told it’s as tall as a 5-floor building. Somewhere else I read that it’s as tall as a 12-floor one. I don’t know. How tall is a single floor on said hypothetical buildings? The information about this ferris wheel in Ukraine (that looks suspiciously similar to the one in Kishinev) says it’s 35 m tall. 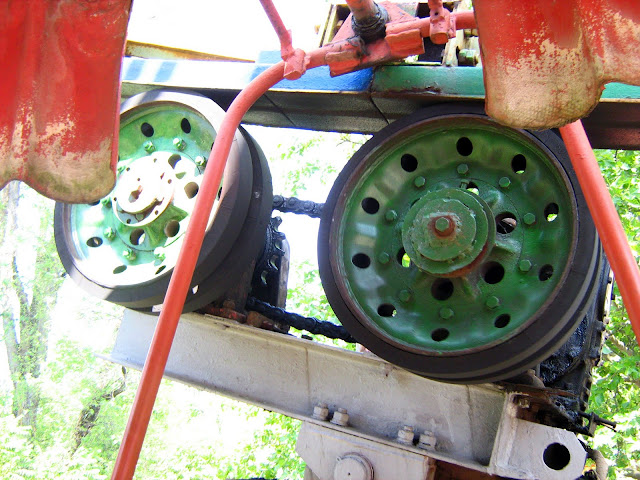 Heavy machinery. While we were going down, I had the strongest urge to touch the thing. Self-preservation, I have it, but in questionable quantities. 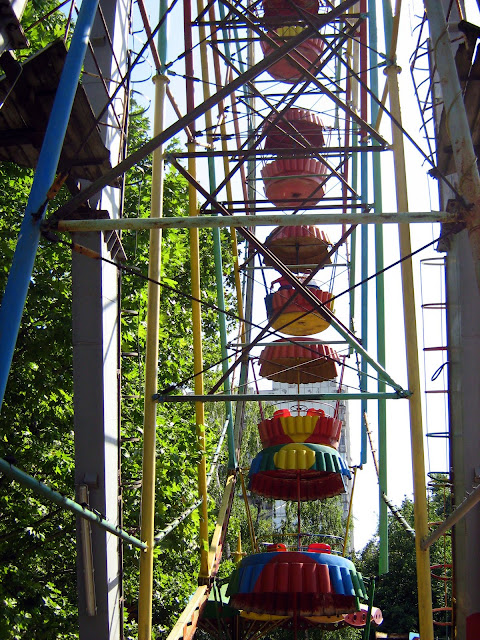 Climbing up! Cousin was freaking out; apparently, she’s terrified of heights. 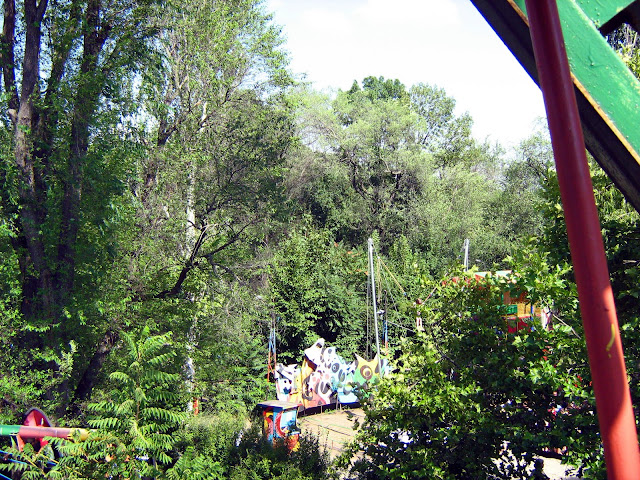 OK, um, over there, to the right, a bit off the centre, where there’s this blob decoration of a thing, there’s a bungee trampoline. It took a lot of restraint from my side to not push all the children aside and hijack the construction for the entirety of the day. When I’m rich and famous, I’m installing one of these somewhere inside my rich and famous house. So I could do this.

Preferably without the subsequent attack. 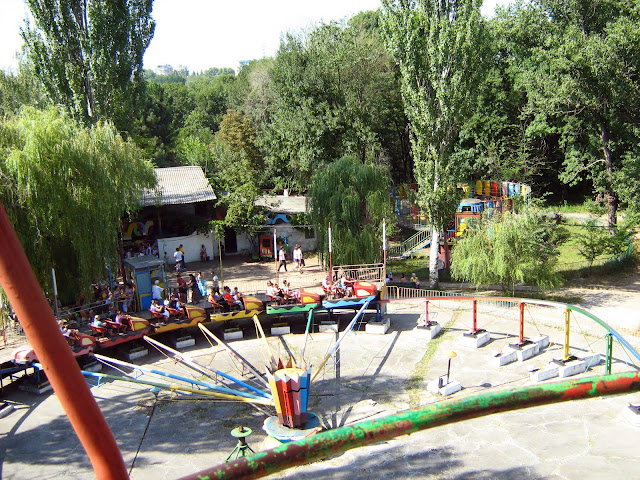 This is another thing we ended up riding. It’s called ‘Funny Mountains’. Funny Mountains. Basically, a very tame roller-coaster, but I squealed and flailed in delight anyway. And a bit farther, at the top right corner, there’s this thing called ‘Surprise’. It spins relatively fast, increasing the angle to about 50 degrees or so.  I wanted to ride it, but a) didn’t want to make the cousin wait because she wouldn’t go (WUSS); b) remembered I had eaten lunch; and c) my vestibular system is unpredictable. I’ll go next time. 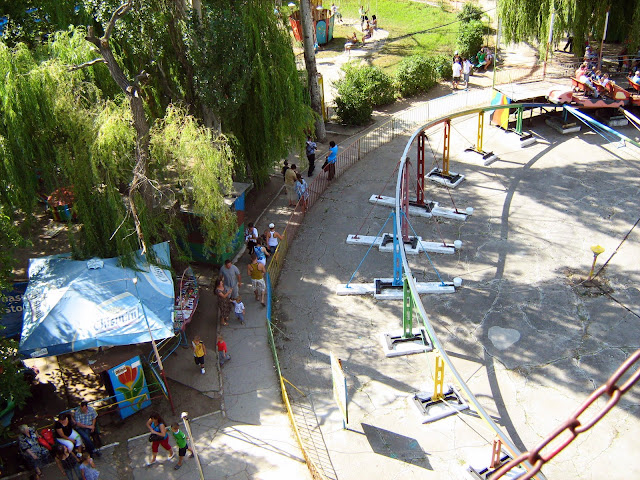 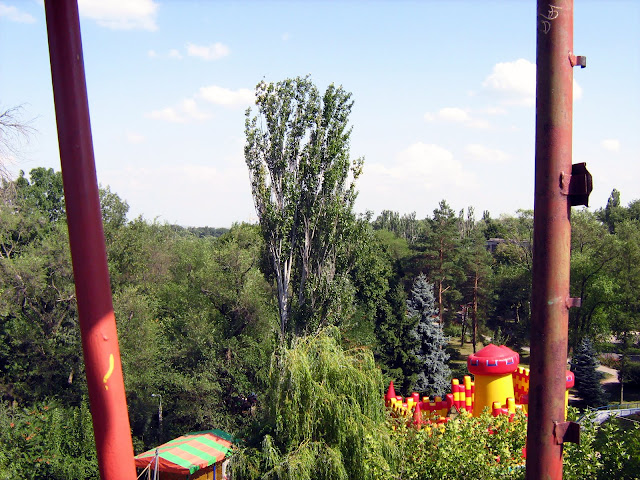 Now, back to rambling about the Ferris wheel, which was the goal of this entire operation, really. First, these metal bars (which are necessary, I understand) kept butting into my pictures. Nearly all of them, which would upset the focus on my poor thing of a camera. 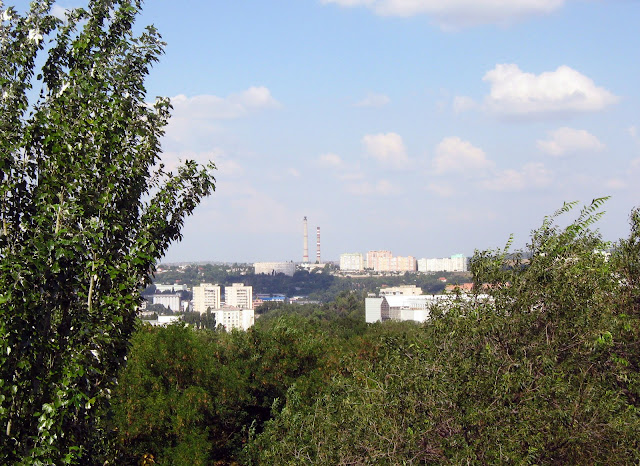 The Ferris wheel does give a decent overview of the city. In Russian it bears two names: ‘wheel of overview’ – or observation wheel – and ‘hell’s wheel’. These two chimneys show a point of the city where I used to work. 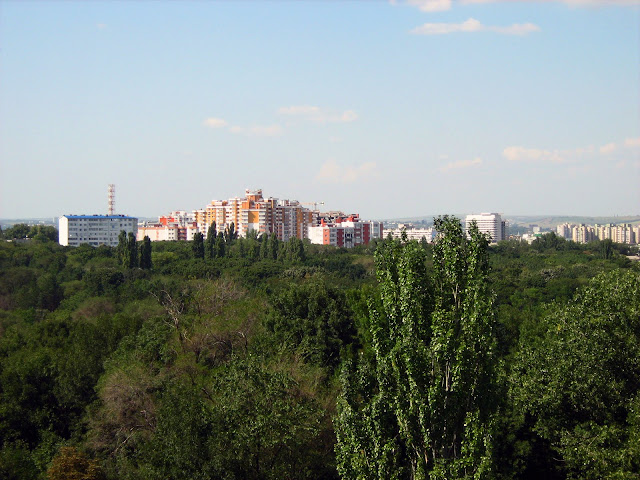 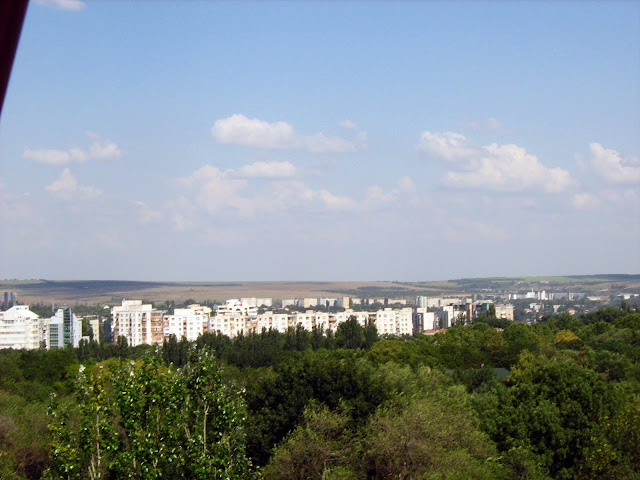 This is the street cousin and I walked when going home. Not pictured (to the very left) is the shopping centre (Jumbo) we stopped at for coffee. 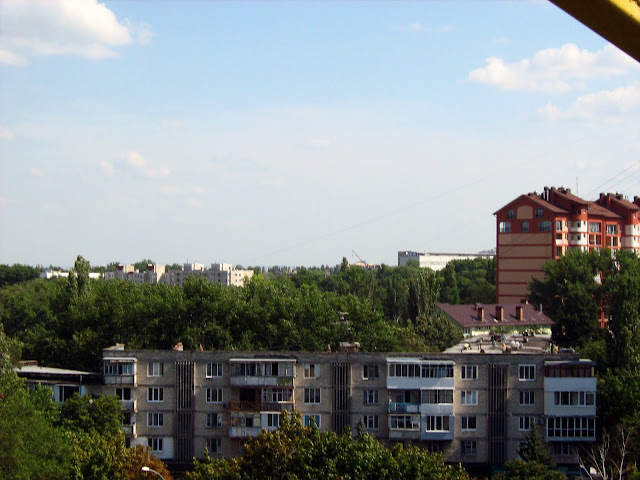 A friend used to live in that building. 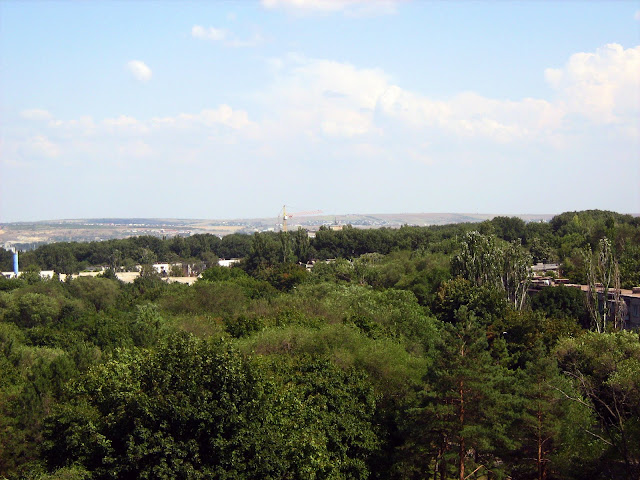 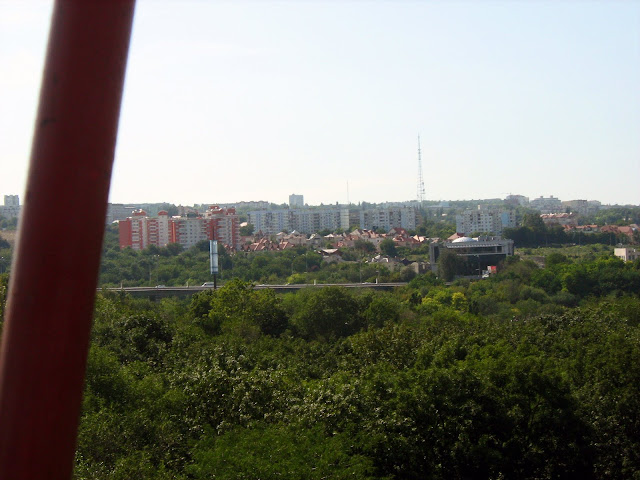 This apartment complex (the orange one) is a recent building. My high school (now closed) was somewhere there. 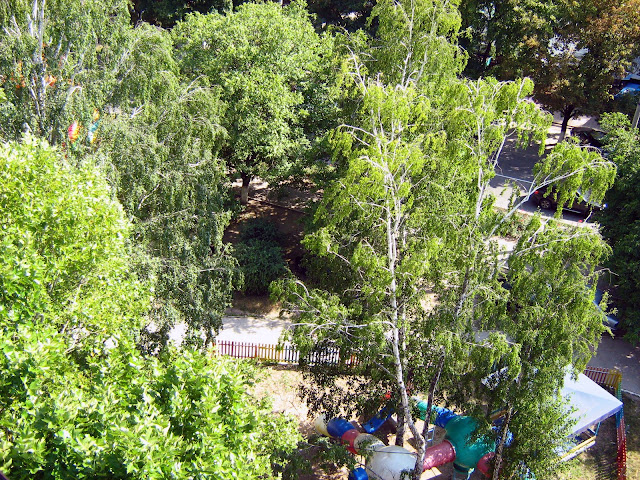 The turn-around time for the Chisinau Ferris wheel is about 6 minutes (I timed it, but not very precisely, next time I’ll use an actual stopwatch). Out of these 6 minutes, only 2, maybe 3 provide decent vantage points to take views of the city. Next time I’ll ride the thing 5 times straight, so I wouldn’t spin around in my seat like a mofo, trying to take pictures of everything I wanted to take pictures of. 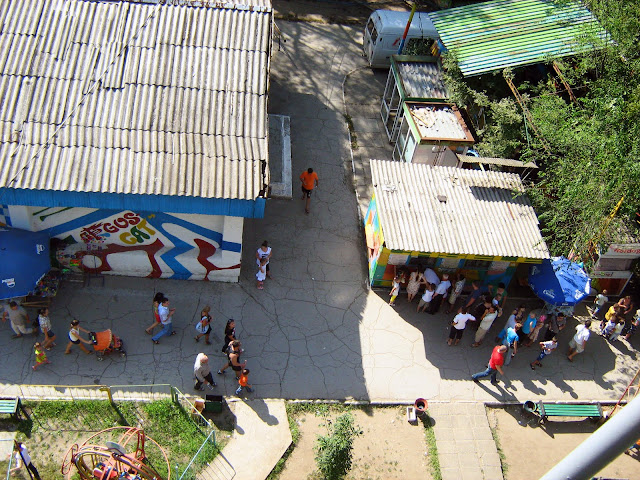 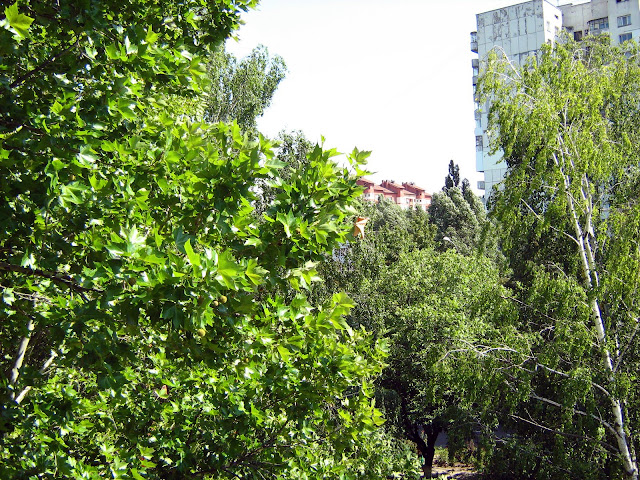 And so, we were back to the ground.

After the wheel, we walked around the park for a bit, ate entirely too much cotton candy and reluctantly drank one bottle of water. Reluctance came after the realisation that no toilets were to be found. I’m convinced they are there somewhere, but I’m also convinced they can be used as a biological weapon in times of dire need.

We sat on a bench and people watched. There were children abound (it is an amusement park), so I didn’t take pictures. 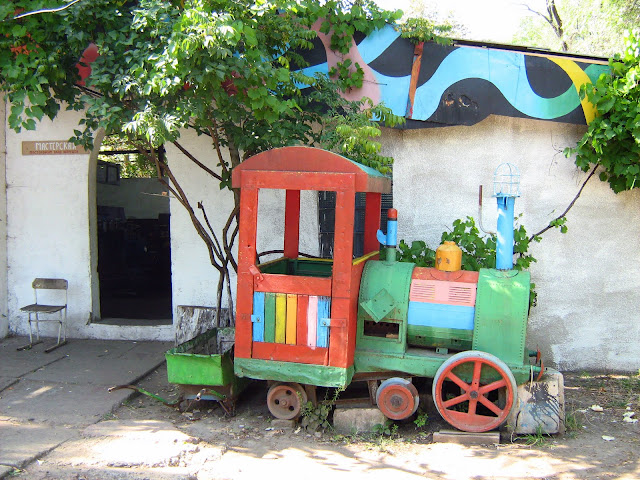 Standing in line for the Funny Mountains roller coaster. I think it took about 40 minutes. I’m bored easily, so I proceeded to take pictures of things that had no children. Not many occasions revealed themselves.

Dependent on your notion of ‘okay’, though. 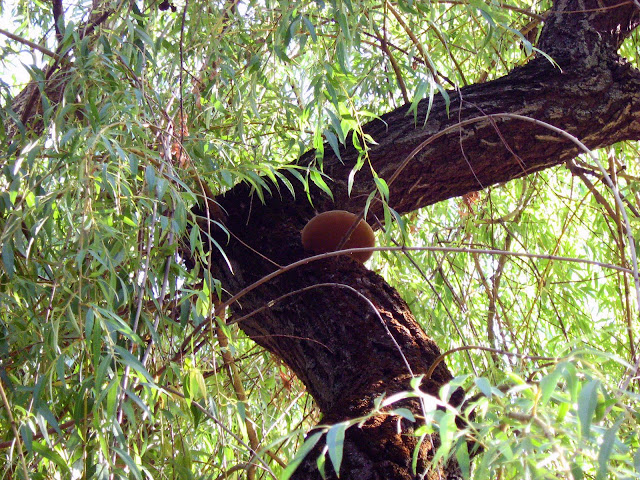 Anyway, have some fungi. 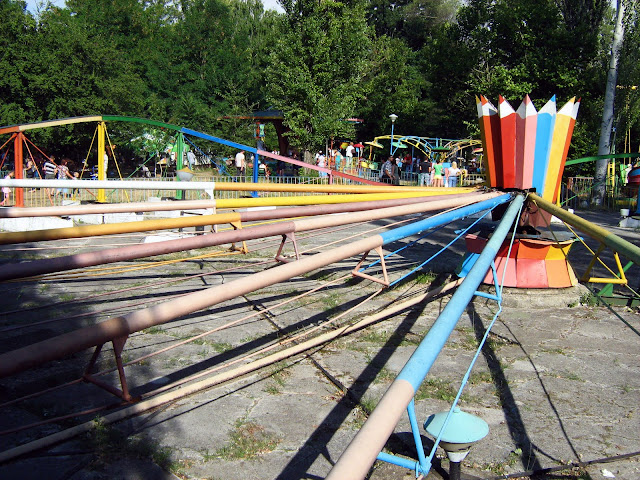 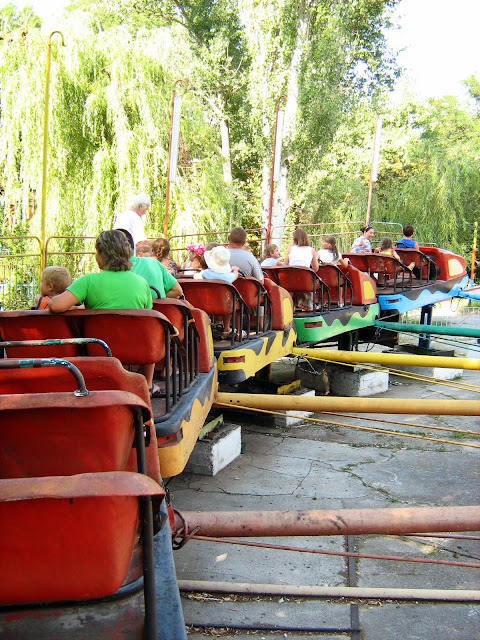 The ride was over all too quickly.  Cousin and I agreed that next time we’ll get two tickets for each ride, to double the fun. 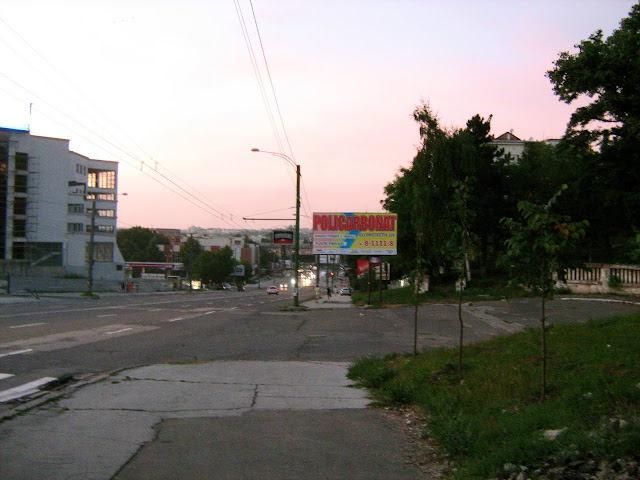 And because everyone secretly loves heavily processed bad pictures (grainy and blurry) of dilapidated towns, I’ve uploaded some to assuage the hunger of the masses. 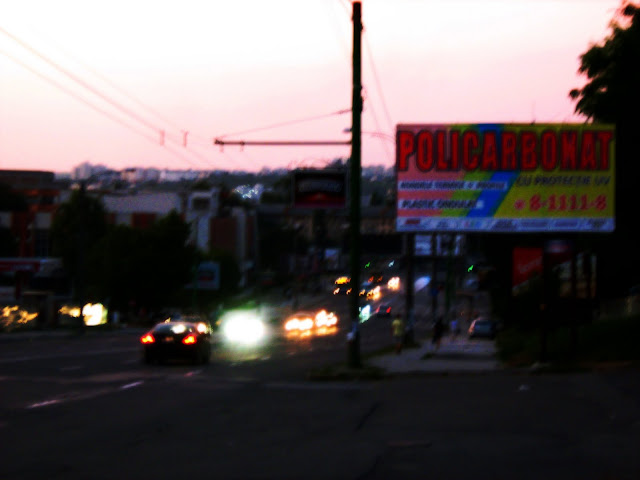 I probably should’ve blurred out the billboard.  I’m not paid by them, I swear. 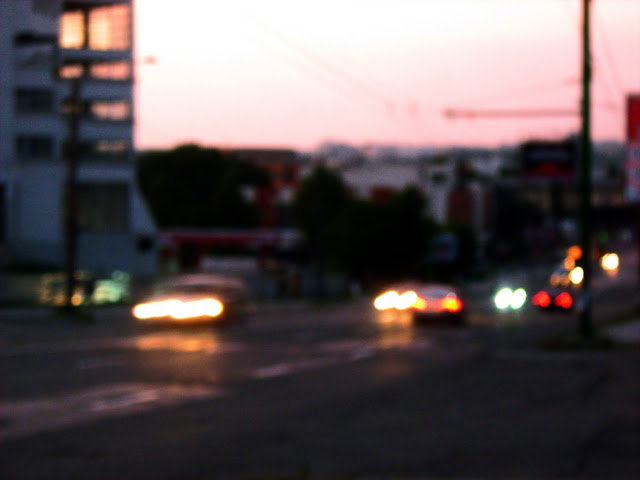 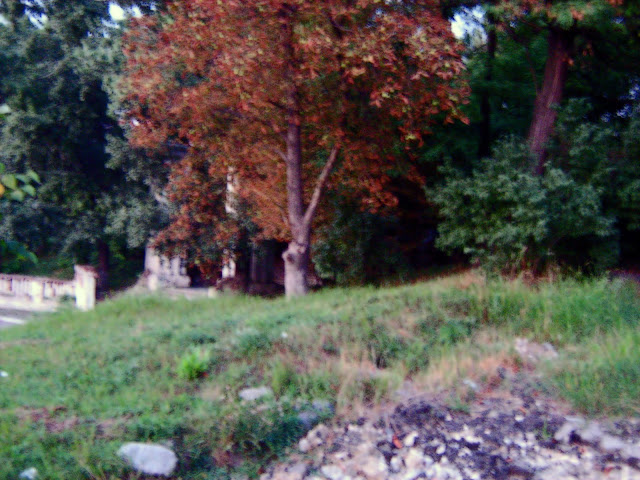 2 thoughts on “All Abroad the Fail Wheel: Visiting the Chisinau Amusement Park with My Cousin.”